When I recently pulled into the Harder Auto Parts store on Groesbeck in Clinton Township, I was reminiscing back to when my father would take me there in his 1970 aqua blue F250, which I could barely see over the dash. I’m going back to the days when the gas tank for the truck was behind your seat, and you had just a lap belt restraint.

Richard Harder owns and runs the store with his son Ryan, and it is the type of place where they greet you as soon as you walk in. They ask you what you need and walk you right to it. They know where every single item is in the store because they put it there. It is a friendly family store where they know what type of oil you prefer and the color of the vehicle you drive. It is the Cheers bar of auto parts, for those who remember that show, where everybody knows your name. What I was not aware of is just how far back the history goes of his family owning local businesses. I had a chance to talk to Richard one day between him helping customers to really get a feel for how important this business is to him and his family.

Russell Harder, Richard’s father, back in 1940 owned and operated the Sinclair gas station on Jones and North Avenue in Mount Clemens. I mentioned that little fun fact to my mother, and she responded without hesitation, “They sure did, and they have always been the nicest people.” Nineteen years later, Russell opened up the Harder Oil Company right across the street from today’s Harder Auto Parts on Groesbeck just south of Hall Road (M-59). He ran that store until 1987 and then helped with his son’s store until he was into his 90s.

Richard always wanted a business and knew he was going to own one from age 10 working for his father. His mom wanted him to go to college, so he ended up going to Western Michigan University and took some automotive classes for a year. He liked it so much that he continued on to graduate with an automotive engineering degree. While in college, he joined the Reserve Officers’ Training Corps and was in the reserves for a total of eight years. He opened up the business in 1977 with financial help from his father.

“Personal service is what has kept us around,” said Richard. 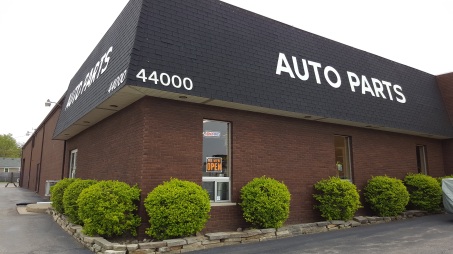 When they first opened, there was not a lot of competition in the area, and now they are dealing with the big box stores and many other auto parts stores in the area. They used to order all the parts from a book over the phone, and then through the years, they had to learn how to use the computer, which took a little time. He told me there were more than 30 distributors out of Detroit buying from local manufacturers, and many of the parts at that time were made in the USA. Now with the global economy, the distributors have dwindled down to just a couple that buy the parts from other countries, so they had to change with the times.

Richard says that if they don’t have it in the store, they can get pretty much any auto part for foreign or domestic vehicles. They also have a great rapport with Hanks Auto Service next door that works on vehicles, and they will send customers to each other.

Harder Auto Parts is also a FFL dealer of firearms and carries a few products in the store. The son, Ryan, picks up extra business during the warmer Michigan months doing auto detailing in the back of the shop. I asked Richard if he is going to retire, and his response was he will hand the business over to his son one day, and he will be like his father before him, helping around the shop.

Richard says they have known customers their entire lives, and now their kids are having kids. They have a solid group of customers that come in year after year. In my case, like my father before me doing business with Russell and Richard Harder, now I see Richard and his son Ryan when I go there. Maybe someday I will see another Harder family member stepping in to help Ryan. Then hopefully for small business’ sake and good customer service, that lifecycle of proud business ownership will continue on this little slice of land in Macomb County under the Harder name.

Jack Johns is a senior economic development specialist with the Macomb County Department of Planning & Economic Development. He specializes in assisting food and agriculture, automotive, energy and retail companies.

In the coming days, thousands of members of the media, industry and car enthusiasts will converge on Detroit to check out the shiny new vehicles, glitzy displays and cutting edge prototypes we’ve come to expect at this annual extravaganza.

But, there’s even more to see at this year’s Auto Show. Head down the main escalator to the Garden Level for an eye-opening learning experience and find out why the U.S. Army has called southeast Michigan home for 75 years.

U.S. Army TACOM LCMC (Tank Automotive Command) and TARDEC (Tank Automotive Research Development and Engineering Center) located at the Detroit Arsenal in Warren, MI will exhibit some of the many vehicles and systems that serve the men and women who serve our nation.

Army TARDEC, responsible for the research and development of fuel technologies and the other integral technology solutions for the Army and their other DoD affiliates, partners with Michigan’s stellar universities and state of the art technology firms to develop the vehicles and systems used by our soldiers around the world. In return, TARDEC offers talent, experience and one-of-a-kind testing facilities to the military, defense industry and domestic automotive companies and suppliers.

Dr. Paul Rogers, Director of U.S. Army TARDEC says, “We bring the best of the automotive industry to the warfighter with some of the most talented engineers and scientists in the industry who have a passion for their work as well as the success of the U.S. Army mission to which they contribute.”

The Army is able to leverage the auto suppliers, logistical expertise and cutting edge technology development available in this region to field the most technologically advanced military vehicles in the world.

The cars we drive everyday share DNA with military vehicles. On board computers, drive systems and fuel technologies developed and produced in Michigan power both. Working with Michigan’s auto suppliers and companies benefits auto buyers, the military and the American Taxpayer.

So, after you’re finished kicking the tires on those glitzy new cars upstairs, head downstairs to see the camo and learn about the military missions that depend on the vehicles and technologies that come together, here in Michigan.

About the Author: Vicki Selva is the Executive Consultant at the Michigan Defense Center, MEDC

Axalta Coating Systems, a leading global supplier of liquid and powder coatings, is the presenting sponsor of the NAIAS Charity Preview this Friday. Since Axalta recently announced its North American Automotive Color of the Year 2016 – Brilliant Blue, it only makes sense to give the Charity Preview a little color.

Brilliant Blue is a mid-shade blue that has both depth and vividness with slight turquoise highlights. It is made with Axalta’s high chroma Vermeera™ technology using a multi-layer process to achieve both an intense blue color and a unique sparkle effect.

For the Charity Preview, the largest one-night fundraiser in the country, Axalta is bring Brilliant Blue to the front in a number of ways. Greeters at the show will have blue ties and scarves, the banner that is cut to open the show is blue, and attendees will be able to purchase a new cocktail, Blue Frost.

“At Axalta, we take pride in being able to support such an exceptional, international event that provides so much to numerous local charities,” said David Fischer, Axalta vice president for strategy and growth. “As a trusted partner in helping automakers develop the appearance and character of their vehicle brands, the Axalta team looks forward to adding a little color to this black-tie affair.”

Axalta is a leading global company focused solely on coatings and providing customers with innovative, colorful, beautiful and sustainable solutions. From light OEM vehicles, commercial vehicles and refinish applications to electric motors, buildings and pipelines, our coatings are designed to prevent corrosion, increase productivity and enable the materials we coat to last longer. With 150 years of experience in the coatings industry, the 12,800 people of Axalta continue to find ways to serve our more than 120,000 customers in 130 countries better every day with the finest coatings, application systems and technology. For more information, visit axaltacoatingsystems.com and follow us @axalta on Twitter and on LinkedIn.

About the Author: John Wray is the Global Marketing Manager for Axalta Coating Systems