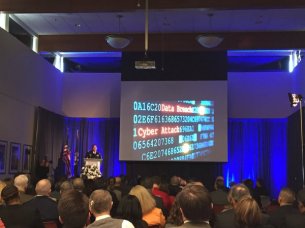 Friday, March 18 marked the grand opening of the Velocity Hub. This is the first secure cyber range in Michigan available to companies to test their technologies on early-stage connected products. It is an extension of the Michigan Cyber Range that is powered by Merit Network and managed by the Macomb-Oakland University INCubator (Mac-OU INC). The highly-anticipated grand opening was filled to capacity with 225 registered guests representing government, business and academia.

The event was emceed by Sean Carlson, vice president of the Michigan Economic Development Corporation (MEDC) and Michigan Defense Center. His first introduction was Sterling Heights Mayor Michael Taylor who presented a video explaining the importance of cybersecurity to large and small businesses and how the Velocity Hub came to fruition.

The next speaker was Sen. Gary Peters who sits on the Senate Homeland Security Committee. Peters recently introduced a bill, the State and Local Cyber Protection Act, intended to provide state and local governments access to training against cyberthreats. He stated that cybersecurity is critical to keeping the automotive and defense industries in Michigan, especially when the state faces competition from Google and Apple headquartered in California.

“This center will make sure Macomb County and Michigan are the center of new technologies that will change the world forever,” said Peters.

Brig. Gen. Michael Stone, assistant adjutant general for installations with the Michigan Army National Guard, spoke next. He is working with the federal government to establish a nationwide network of cyber ranges to train tomorrow’s workforce.

“We planted the seeds, now it’s time for Macomb County to take off with it,” said Stone.

He called the Velocity Hub a unique asset for the entire country, praising the public/private partnership that enables it to be self-sustaining. 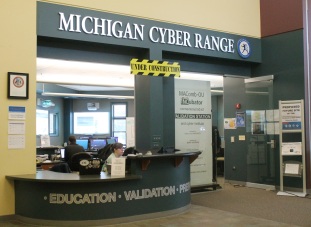 Steve Arwood, MEDC CEO, spoke about the strong relationship Macomb County has with the Michigan Defense Center, thanks in part to the effort of individuals such as Stephen Cassin, former Macomb County Planning & Economic Development director. He stated Michigan has what is needed to retain and attract talent and warned against complacency during this time of vast technological change.

With experience as the former Macomb County sheriff, Macomb County Executive Mark A. Hackel stressed the importance of having someone to turn to when Internet crime happens. He stated there is a need to cultivate subject matter experts who can tackle issues, such as cyberattacks, that affect the public. He cited Planning & Economic Development Deputy Director Vicky Rad as being an expert in the Macomb County cybersecurity initiative.

“Today begins the next chapter in services offered here,” she said.

Dr. Joe Adams, vice president of research and cybersecurity at Merit Network, presented Larry Herriman, interim executive director at Mac-OU INC, and Jennifer Tisdale, cyber programs manager for defense and automotive offices at MEDC, with coins. He credited the two individuals for making the hub happen. He said the hub will not only create a more cyber-aware workforce able to protect their organizations, but it will also serve as an economic development magnet.

The last speaker at the event was Nathan Dragun, director of cyber range development for the Michigan Cyber Range at Merit Network. He addressed the audience from a hacker’s perspective, stating the focus should not be on controlling the Internet, but embracing and working with it, reminding everyone the tools used to attack are the same used to defend. The hub is valuable because it will enable users to keep up with technology and to gain a true understanding of how to use it through hands-on training, testing and collaboration. 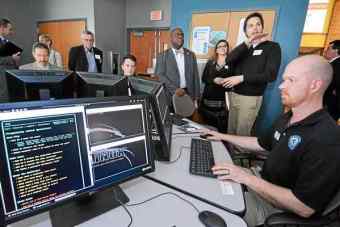 Pamela Lewis, director of the New Economy Initiative, had the honor of cutting the ribbon. An open house followed where attendees networked and explored the Velocity Hub. Decked out with a new front desk, computer stations, white boards and mounted projection screens, guests were able to view a live Alphaville exercise where Oakland University students were participating in a virtual match of capture the flag.

The Velocity Hub is the result of the collaboration of the Merit Network, the Michigan Defense Center of the MEDC, the Macomb County Department of Planning & Economic Development, the city of Sterling Heights and Oakland University. It offers training space, hosts live hacking exercises and assists in software testing for local companies. Small businesses in the defense, homeland security and advanced manufacturing industries may benefit the most from these services as hackers may view them as vulnerable and a way to hack into larger companies for whom they are suppliers. Mac-OU INC will also offer certification classes in more than 20 different cybersecurity disciplines.

For more information about certification courses or how you can utilize the Velocity Hub, contact Larry Herriman at (586) 884-9332 or email him at herriman@oakland.edu.

Caitlin Gerds-Habermas is an associate planner in Business Outreach and Communications for the Macomb County Department of Planning & Economic Development.